Now at last I am approaching the time to assemble everything and try out the bridge that I made (of ebony, of course!), string it up and try it out for the first time… 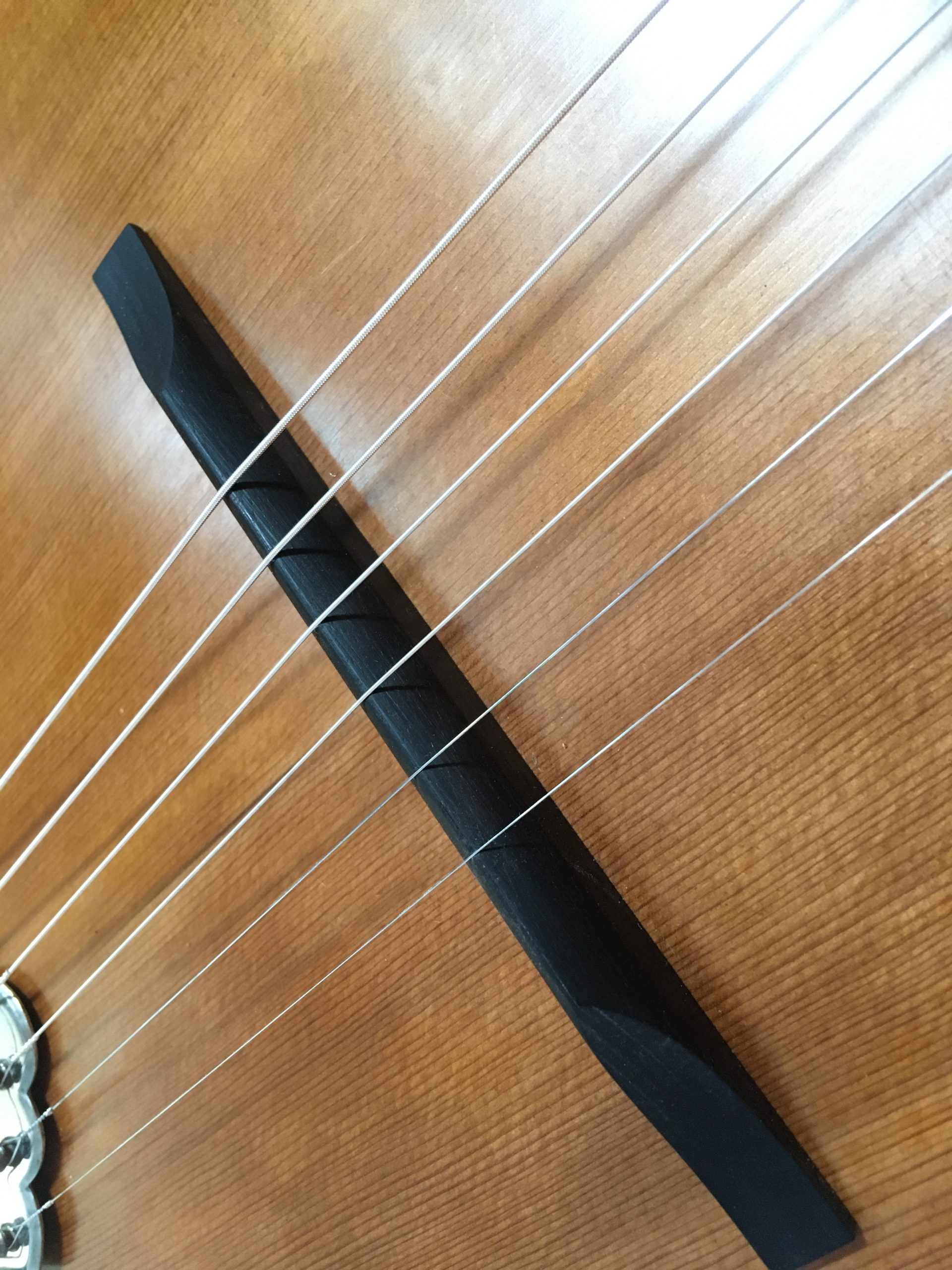 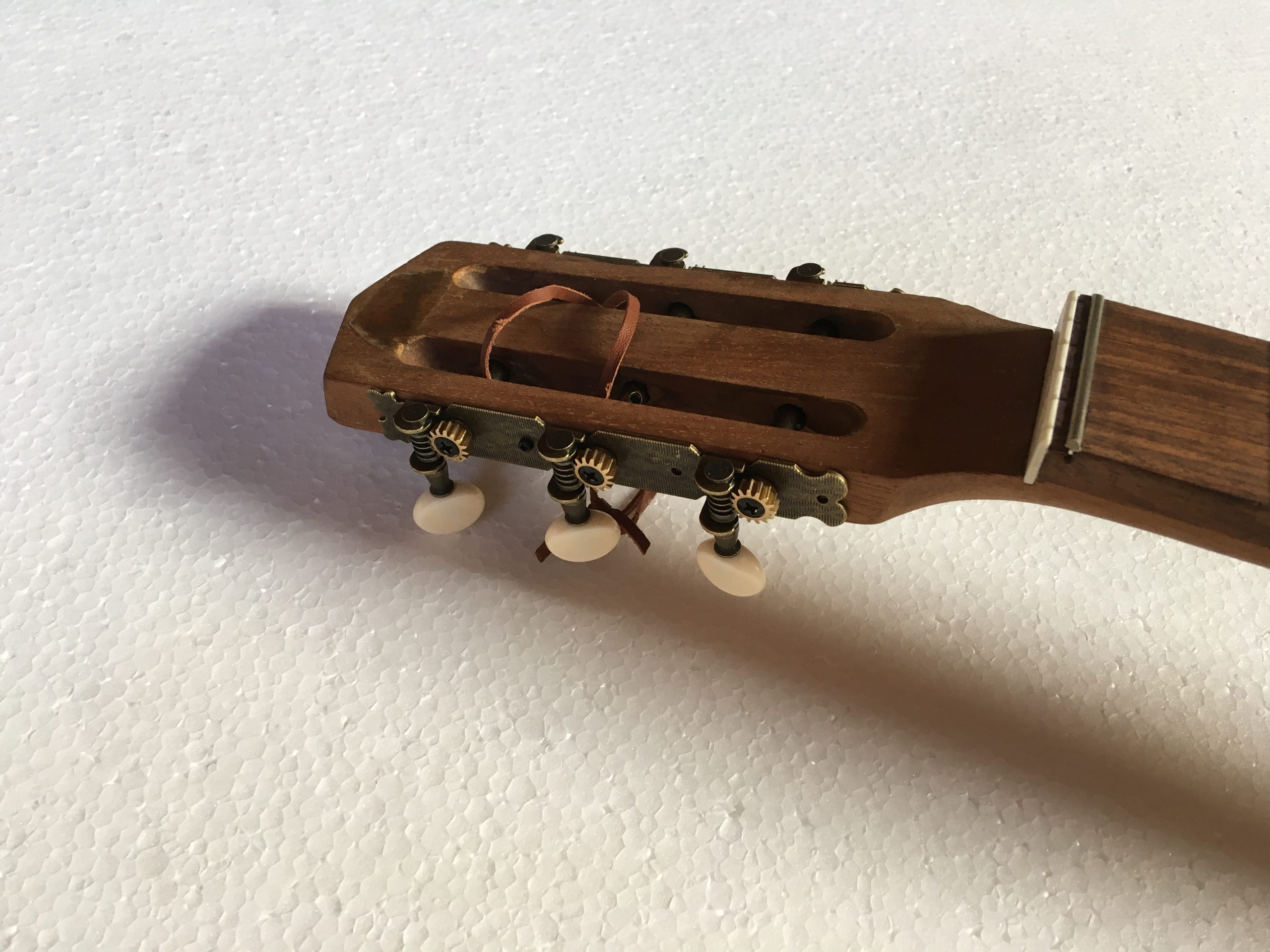 Nice and simple inlay work on the ‘rosette’ 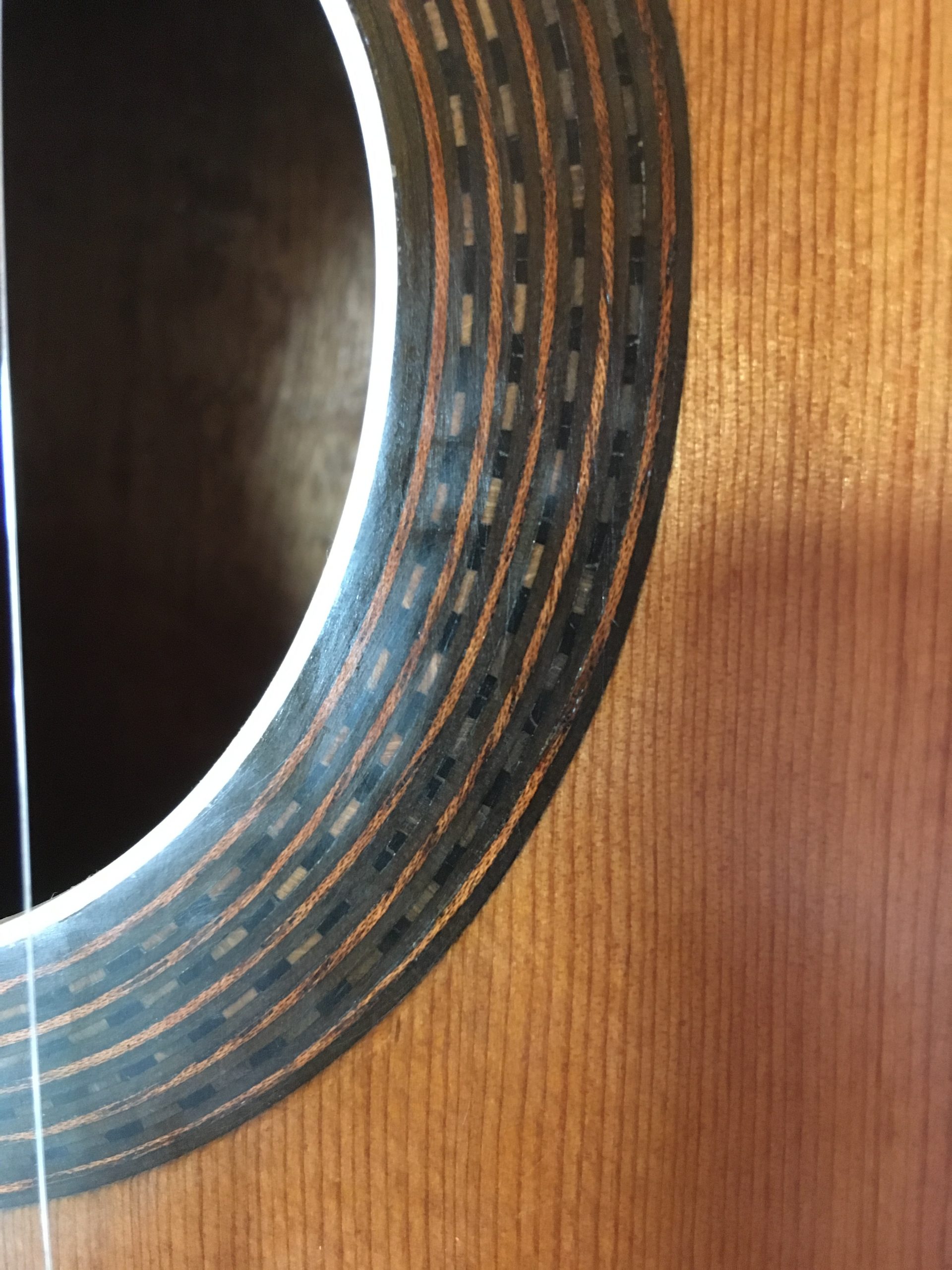 Ready for the bindings/purfling and the frets and nut already fitted – notice the subtle difference in the colour of the top where the original bridge would have sat for years, shielding the wood from darkening (more obvious in the photos below this one). 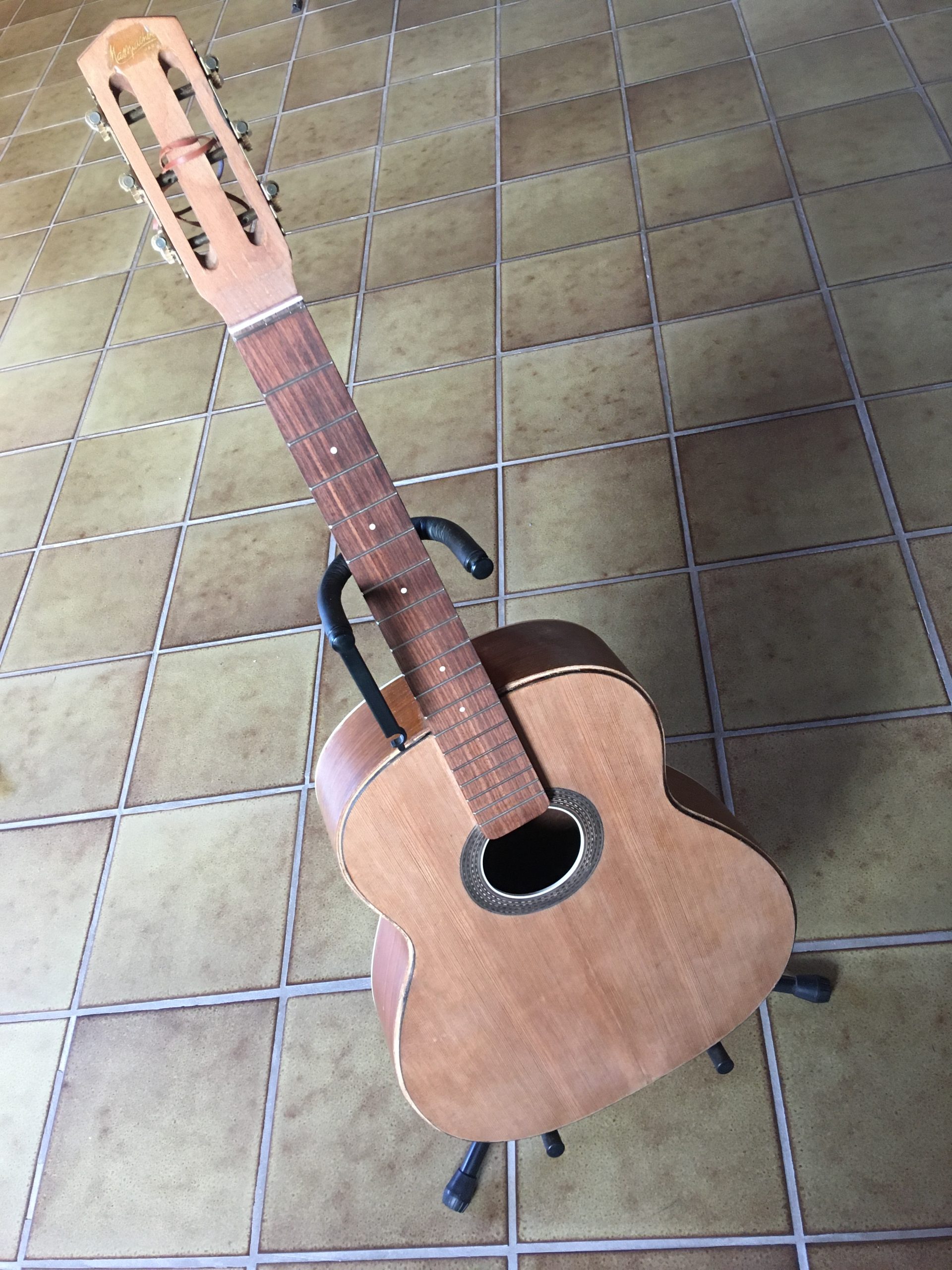 Here with one side taped to glue the bindings. 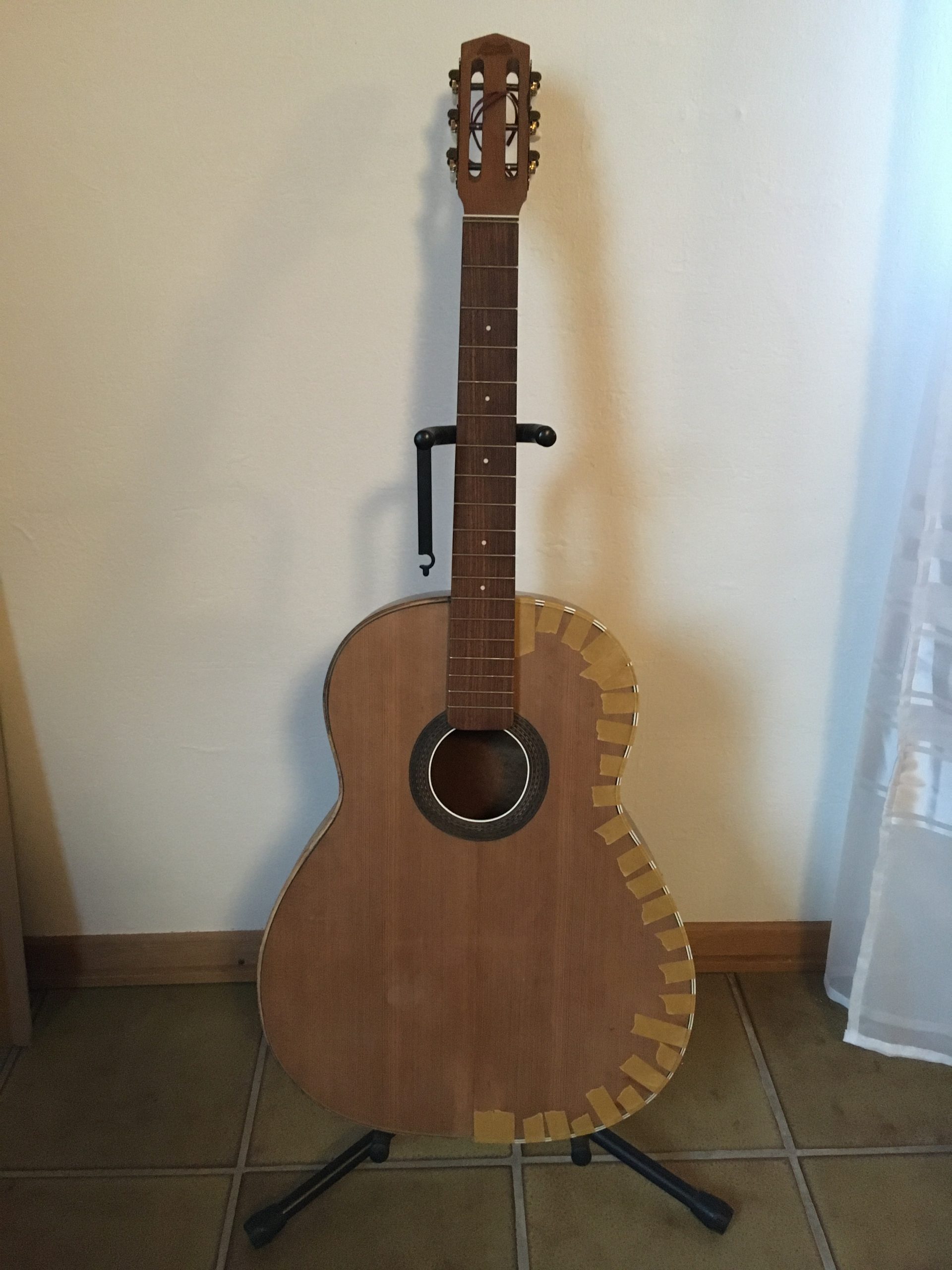 The second side being glued… 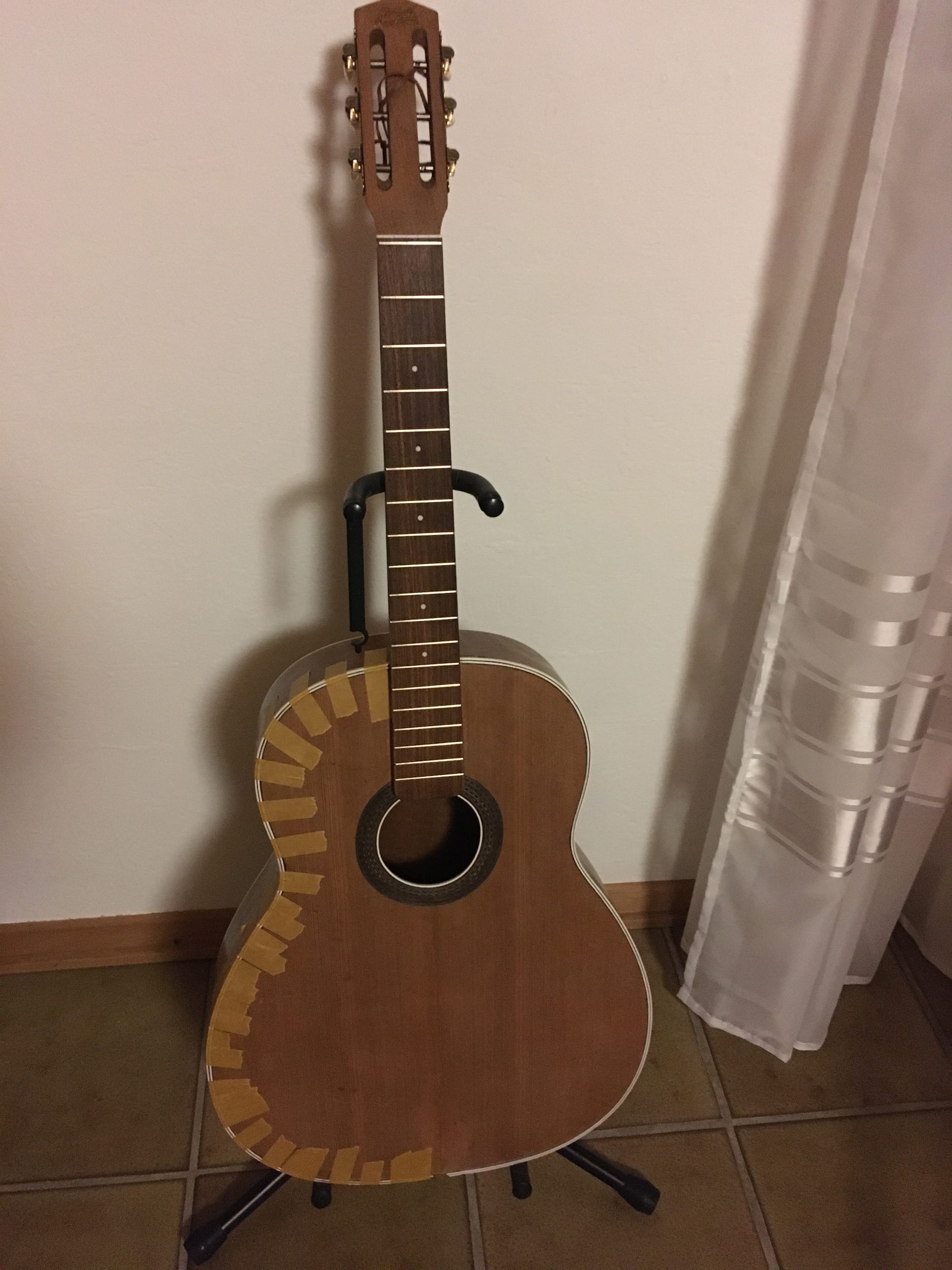 After fitting the bindings, all could be finally assembled… Here is the binding at the bottom showing the corrective build-up of veneer around the bottom end of the top. I can’t claim that it is invisible, but at ‘player’s distance’ hardly noticeable. It retains the the original top without replacement, retaining the idea of using as much of the original as possible. Putting a new top on would have defeated the object and to my mind, ruined the guitar. 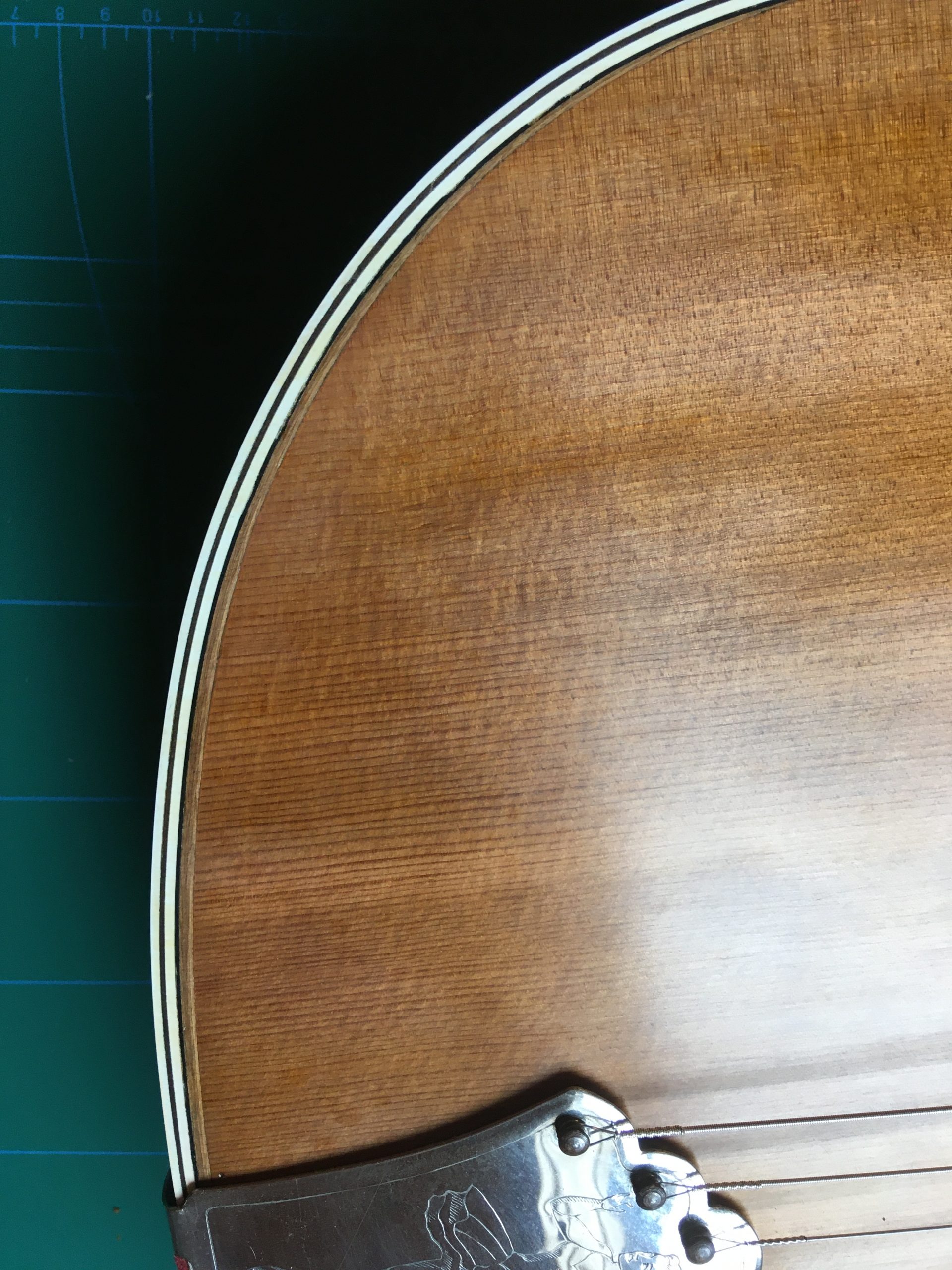 The finished article after shellacking and rubbing the front with 0000 wire wool and applying furniture wax. It will still need a little work and a few more applications of wax before it gets a proper sheen, but hey, this is a 100-year-old guitar and doesn’t have to look like it just rolled out of the factory! 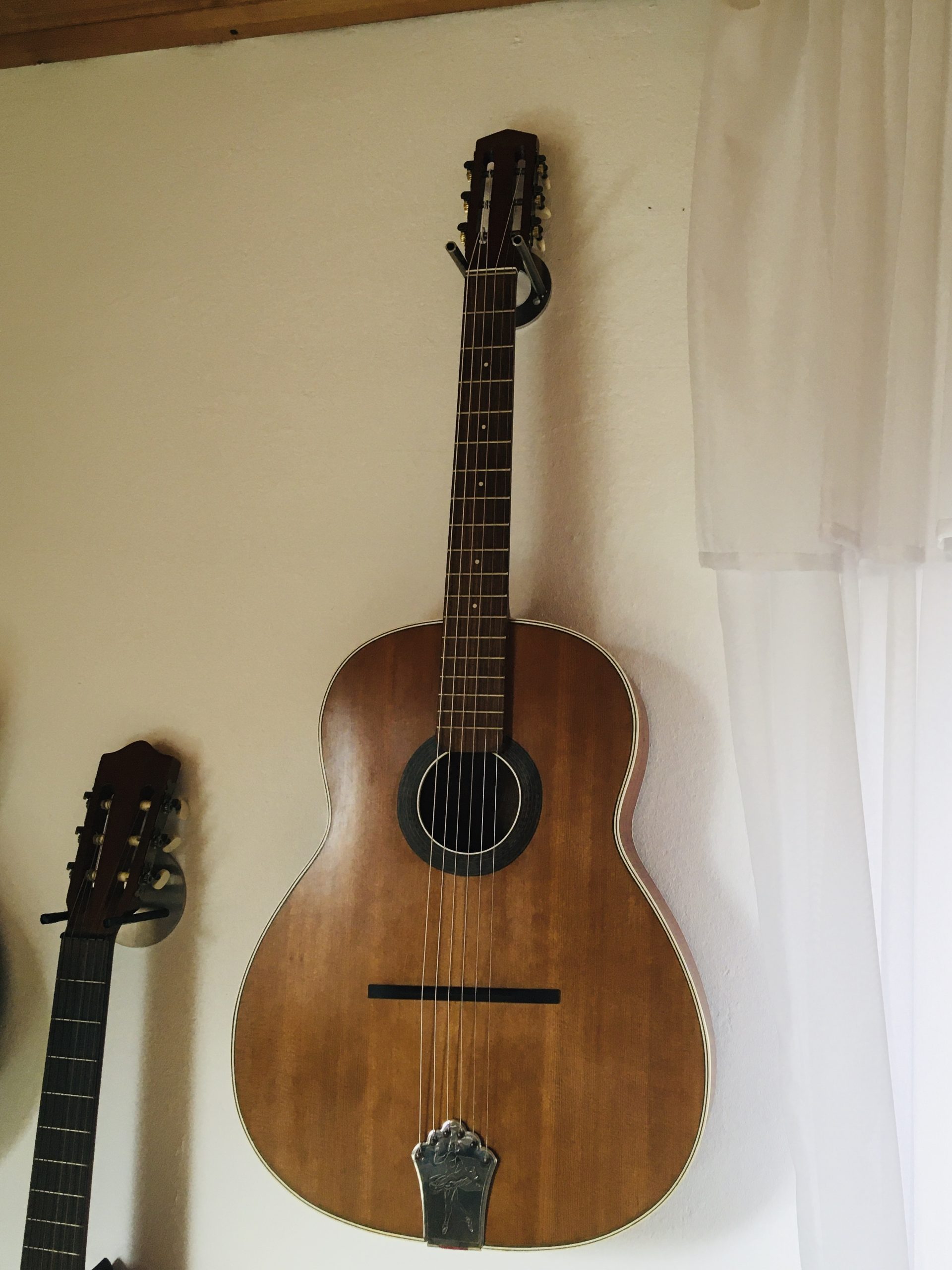 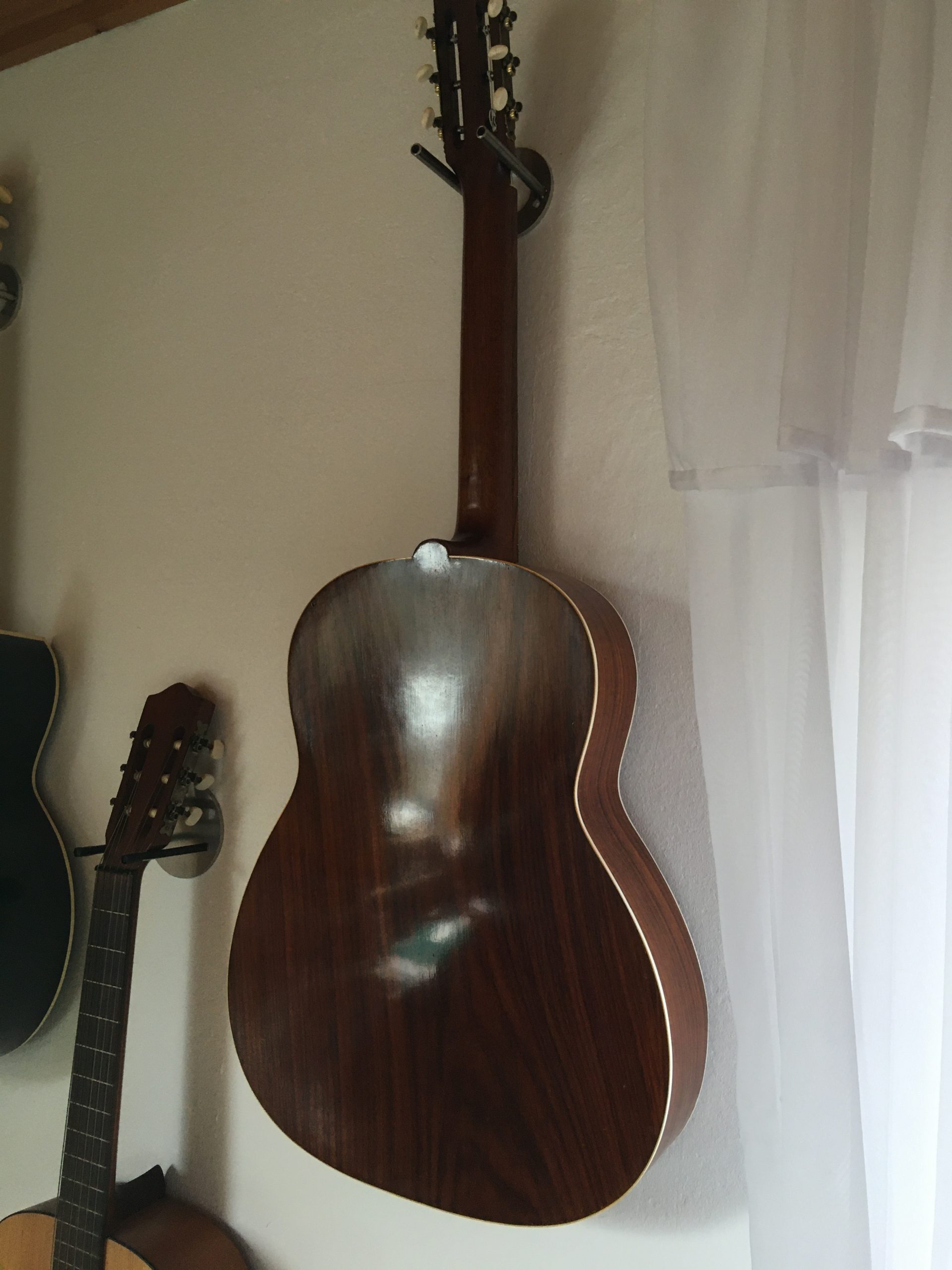 Its place on the wall at home (camera-distorted angle to the bridge, by the way!) next to an old Ukrainian ‘Trembita’ (Epiphone copy?) and a ’70s Höfner bottom-of-the-range (¾?) classical. The bass also (now) works active and passive, but was an electronic mess when I got it 🙂 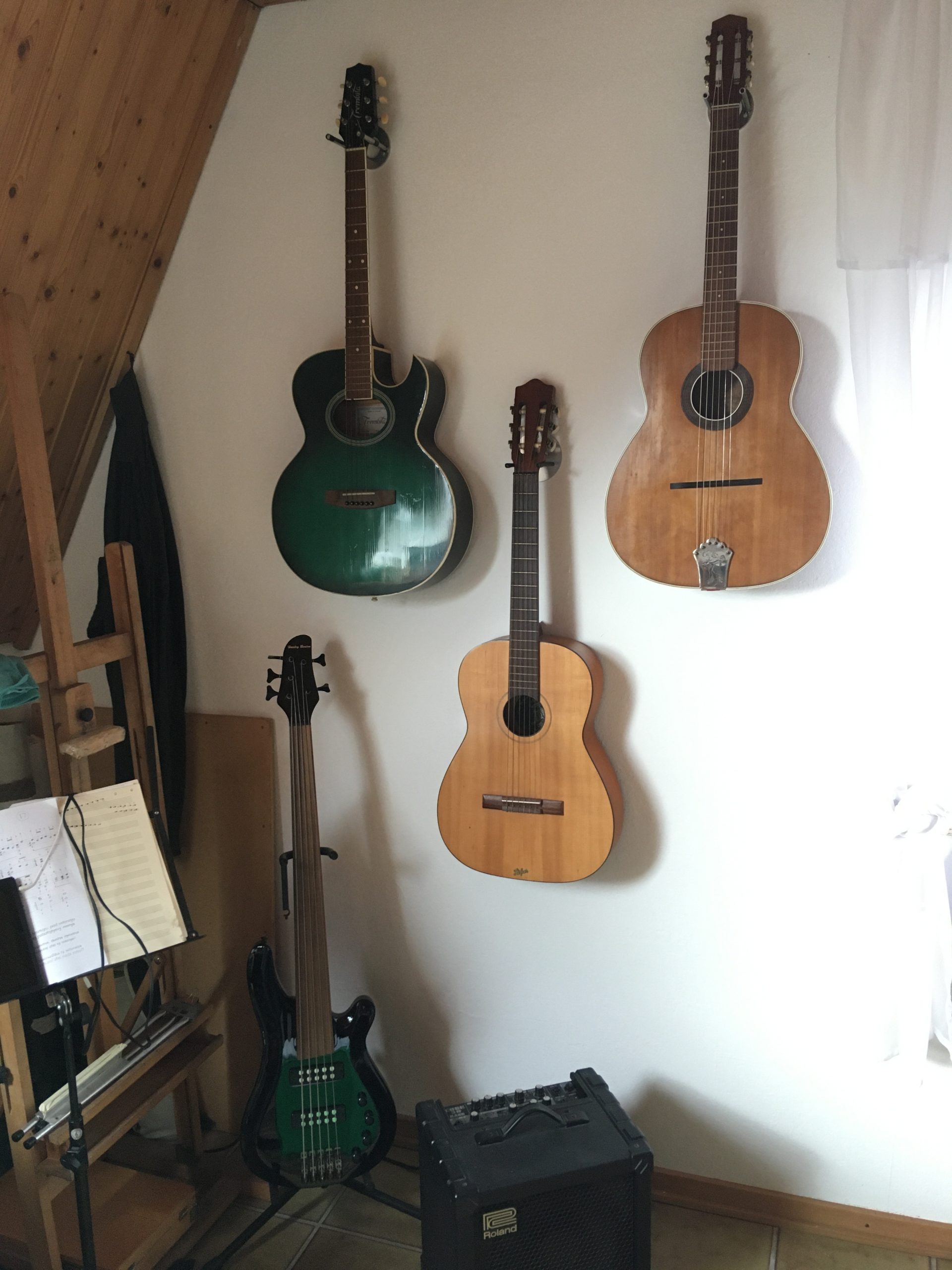 A new day dawns on the Masspacher which played very nicely from the word ‘Go!’. I may have to adjust it a bit as time goes by and it settles, but despite the gargantuan thickness of the neck, it plays with a light touch and strong tone – the sustain is great, of course! 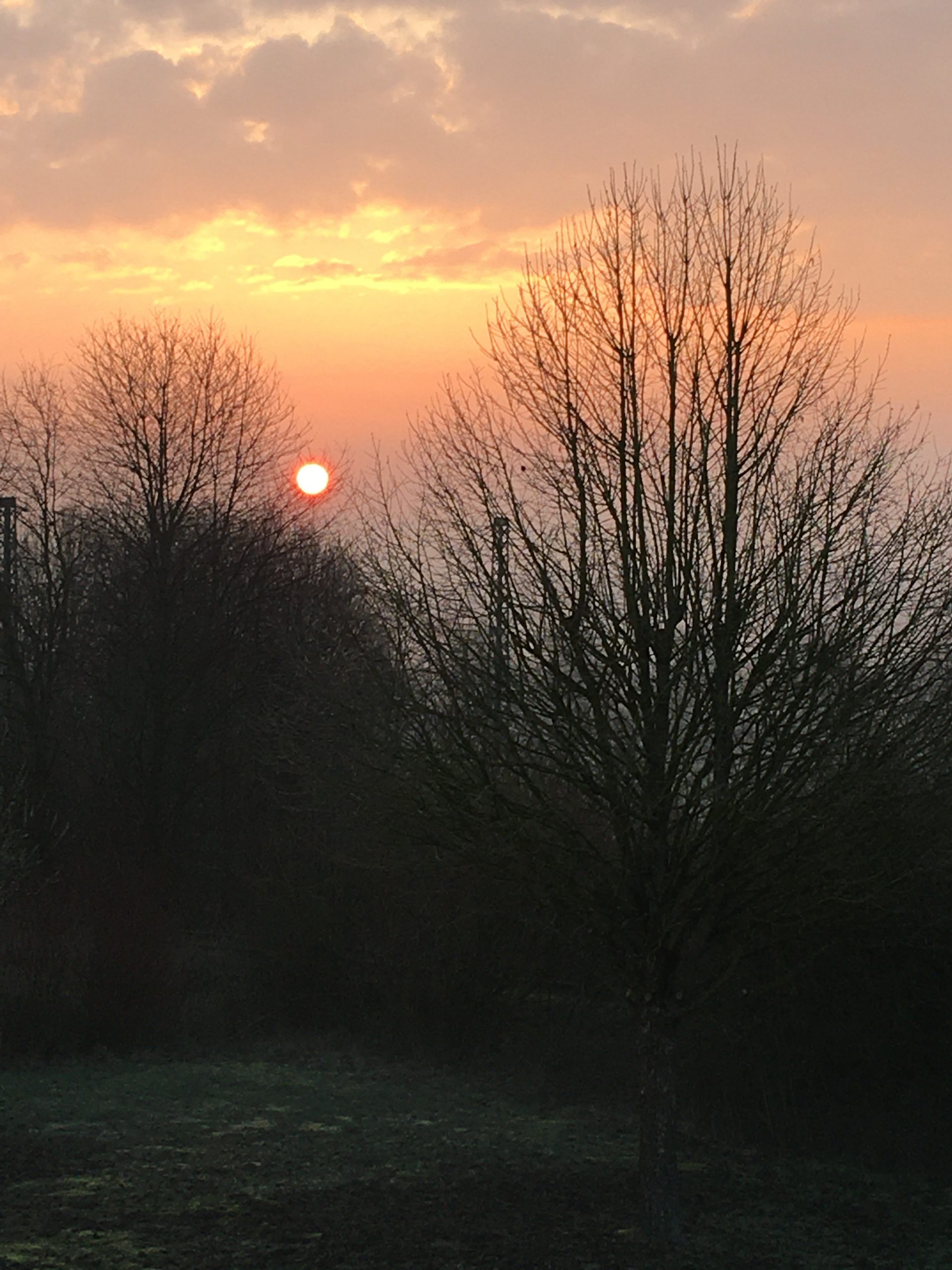 Maybe at a later date I will even post a sound sample, who knows!