How interesting it is to get two lenses like this next to one another to compare, made only a few years apart. The two in question are probably the most underestimated in Minolta’s lineup for very many years and still perform very well even against modern lenses at 43MP… These are just as sharp, if not better, certainly in the edge resolution than the 2.5 and the 100mm 2.0 that is in high demand (only because it is rare, not for its performance).  I might  go into that in more detail later, around when I release a test of the 24mm VFC 2.8, how to use it to do what it does, what VFC is actually useful for and some ideas about lens-testing methods in general, including inherent non-flat focus field (curvature) in lenses in general – which is always taken as given.

So, to start off with, looking at the fronts, I have two 100mm, 3.5 lenses from Minolta, built only a few years apart. The early one, an ARI, ser 1201946. Looking at many lenses, I might conclude that this is a lens of series code 12, number 01946 produced? There are many theories about the Minolta serial numbers and any of them could be right or wrong in the absence of any proof 🙂 Made somewhere in 1959-60. Whatever, the front engraving is as expected. The second one, an ARII with the serial 1213805  is missing the expected ‘Lens made in Japan’ engraving on the front, so is one of the earlier ones of this series produced.

If you look closely, you will also see that the front lens is more deeply recessed into the front on the later model. 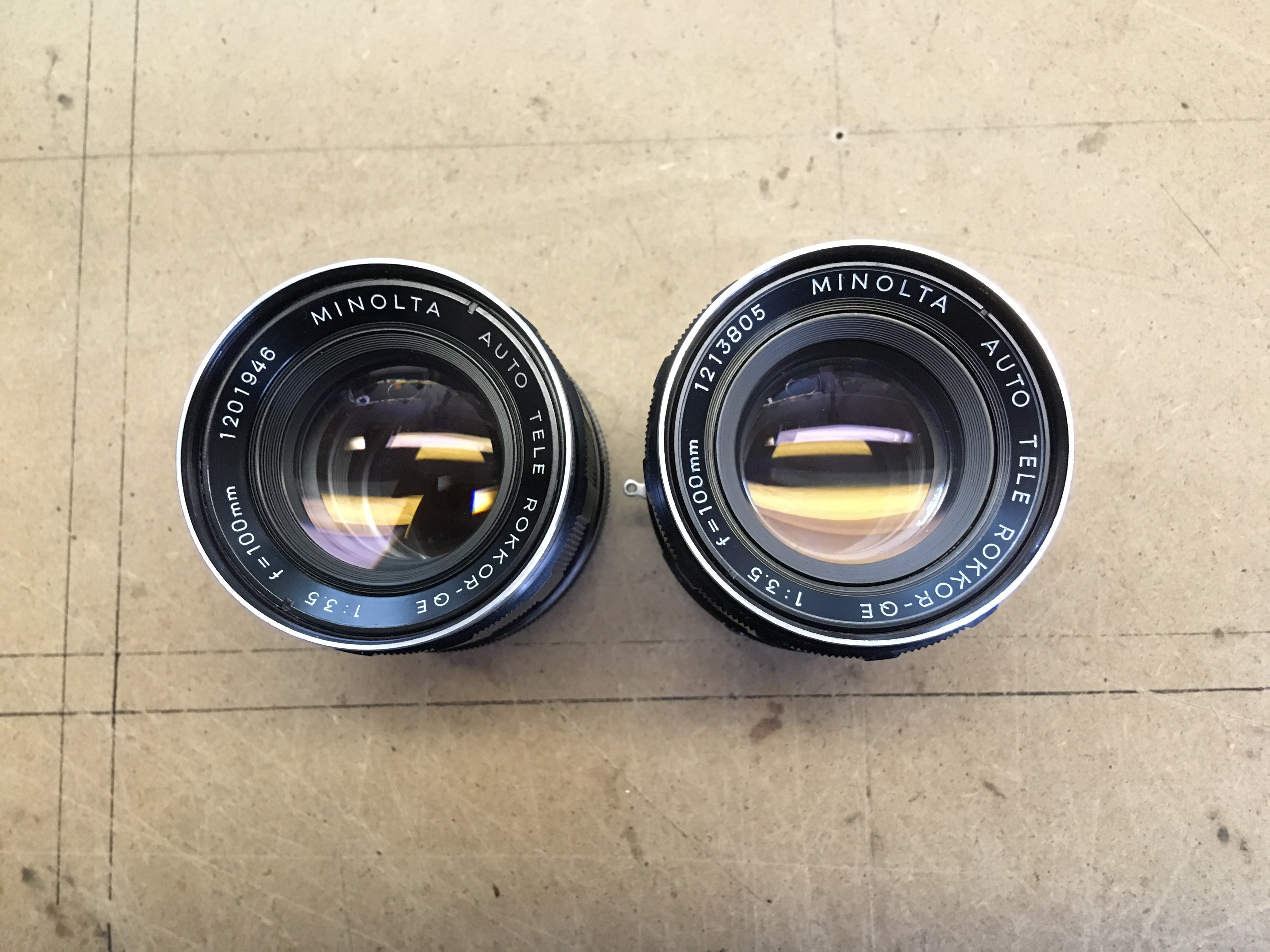 Now turning to the back, we can see more differences: ARI-typical closed ring and screwed-on aperture link, ARII-typical linkage poking out of a slot in the back and, of course the stop-down lever now necessary after the automatic diaphragm was introduced on the SR-1 (4th model) and the second run of the SR-3, meaning that after the exposure, the aperture opened immediately. Yes, the knurled ring is missing on the stop-down lever, but will be added when I get one in 🙂

Also note the relative position of the rear lens elements, both focussed at infinity in this picture. 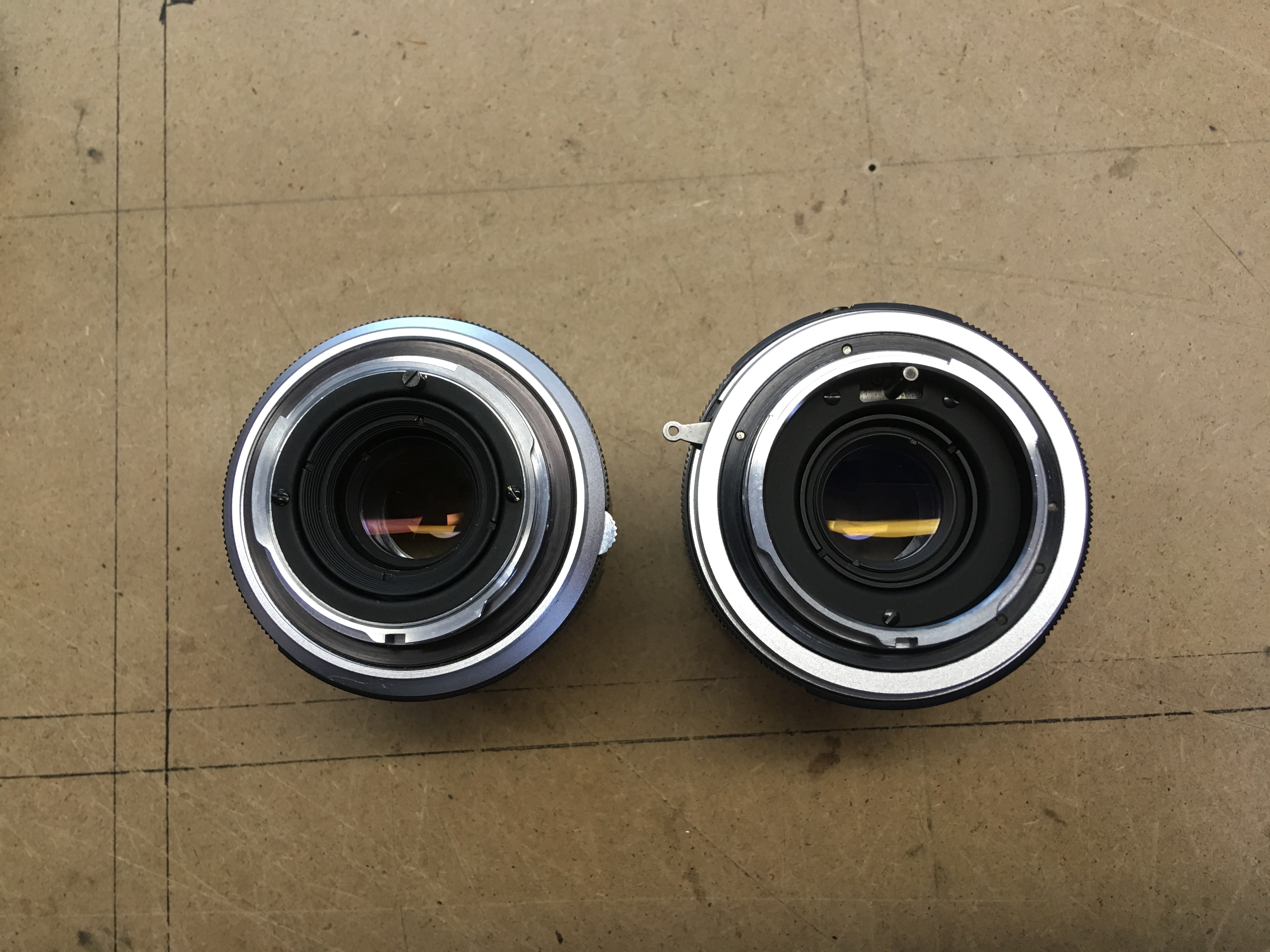 Here shown at an angle to emphasise the differences between the two, the ARI sits considerably deeper, which makes me wonder about them being the same formula for lenses and groupings… 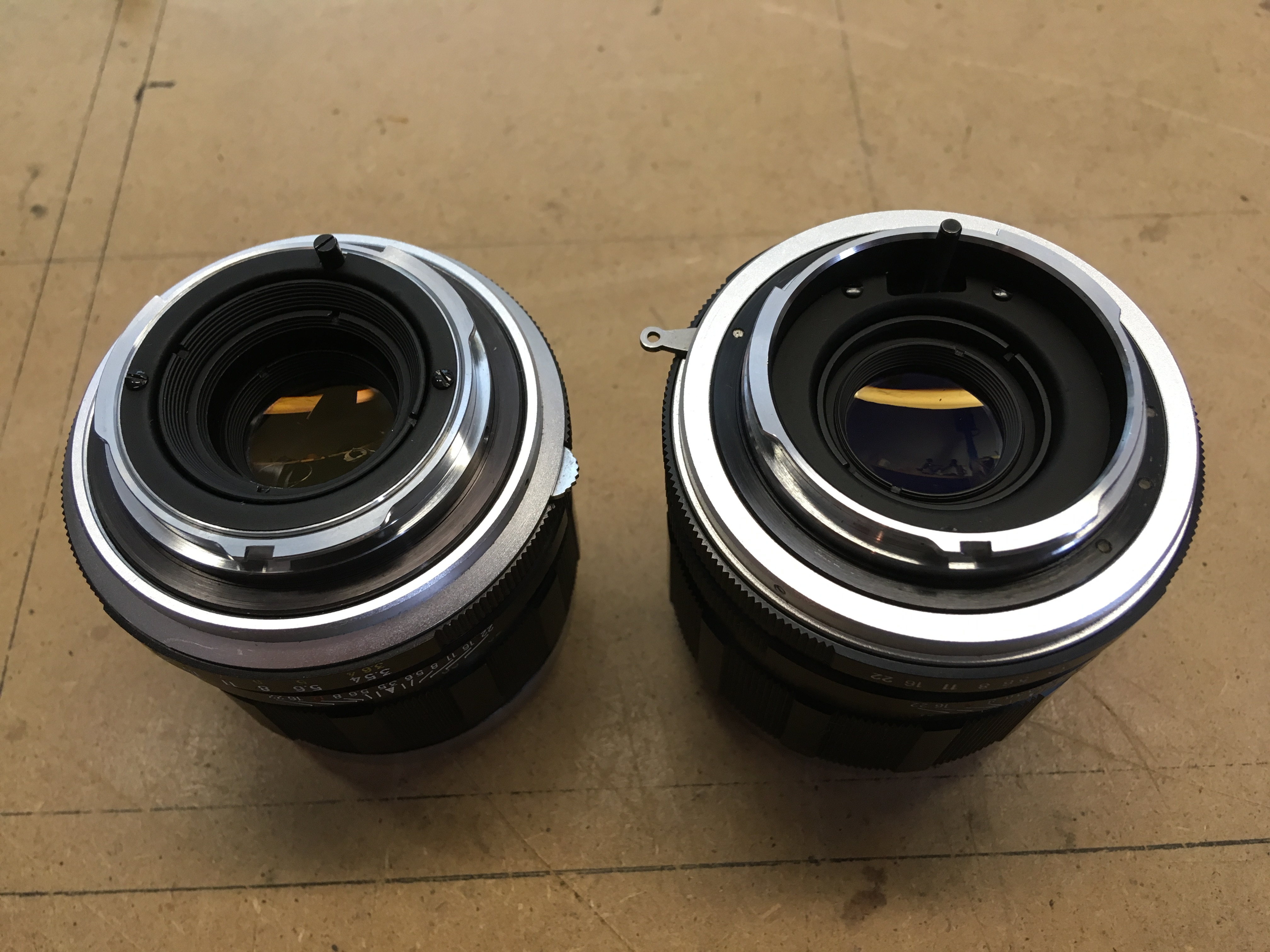 Now both are focussed as close as can be done, 1.2m and 4ft, ARI Stil much deeper. 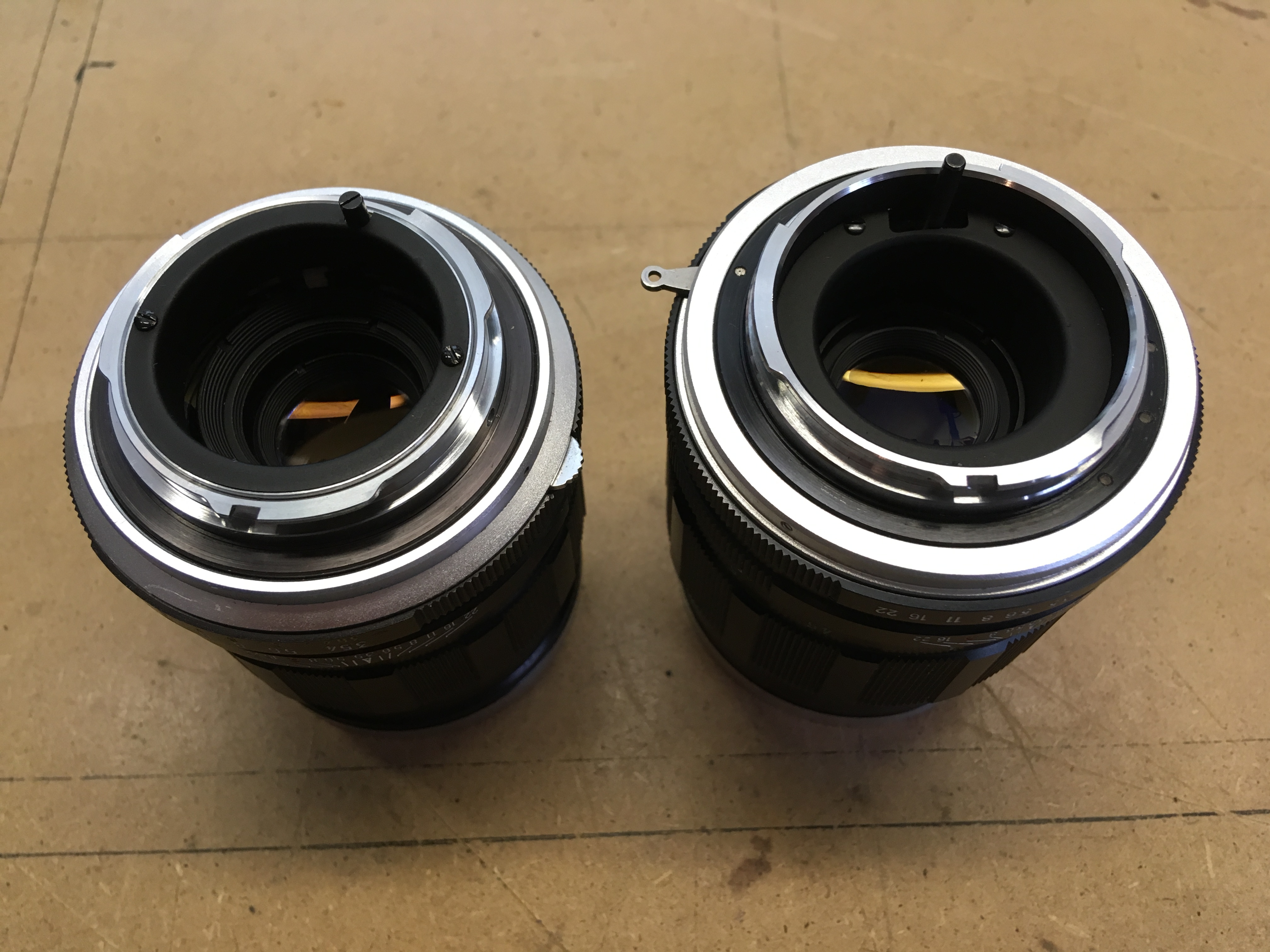 Interesting how both are so different internally, obvious from the back. Look how the shrouding goes right in to cover the full depth of the travel of the rear element here on the ARII… 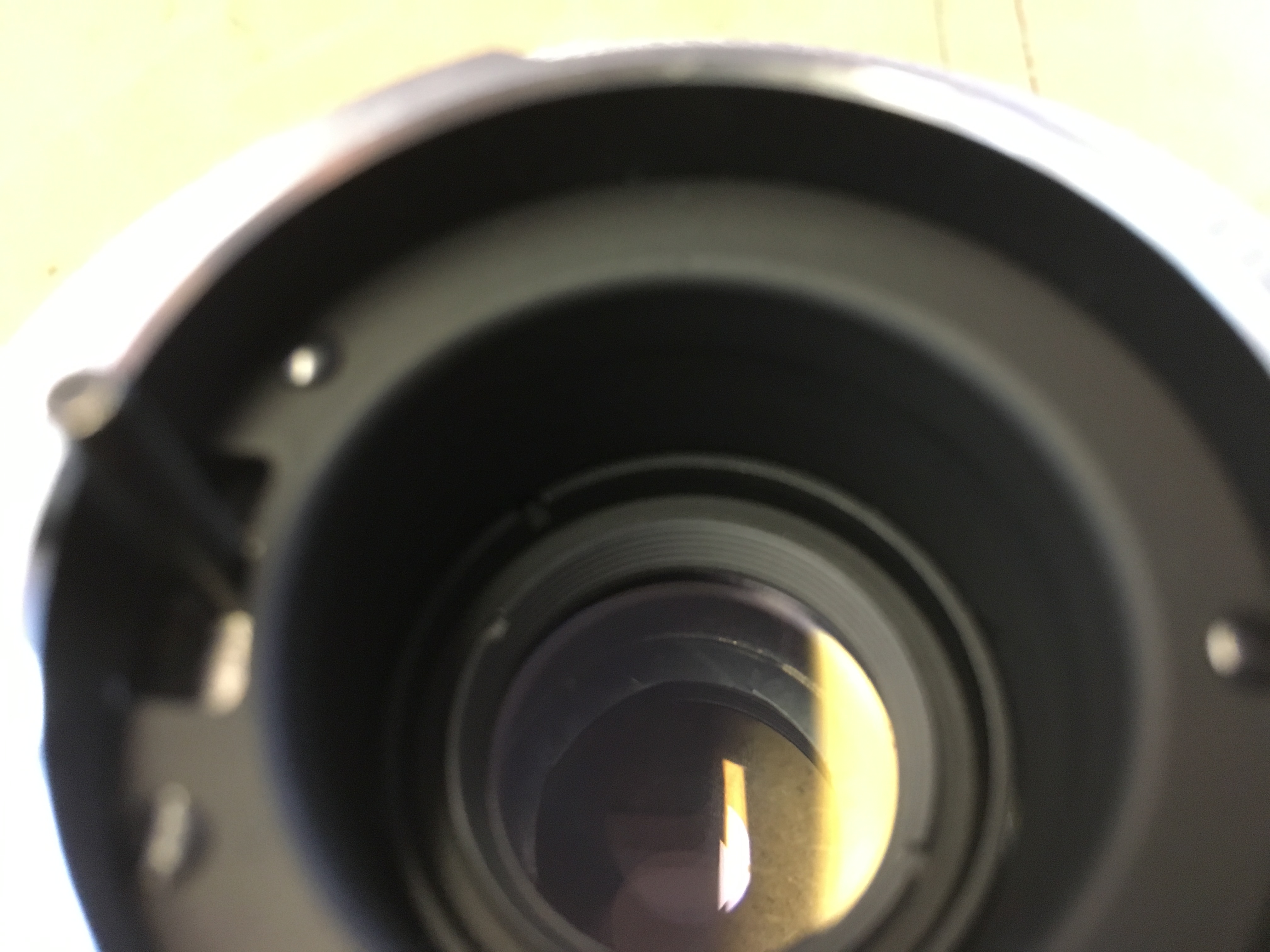 … Whereby here the thread of the focus ring is exposed when wound to close-focus! 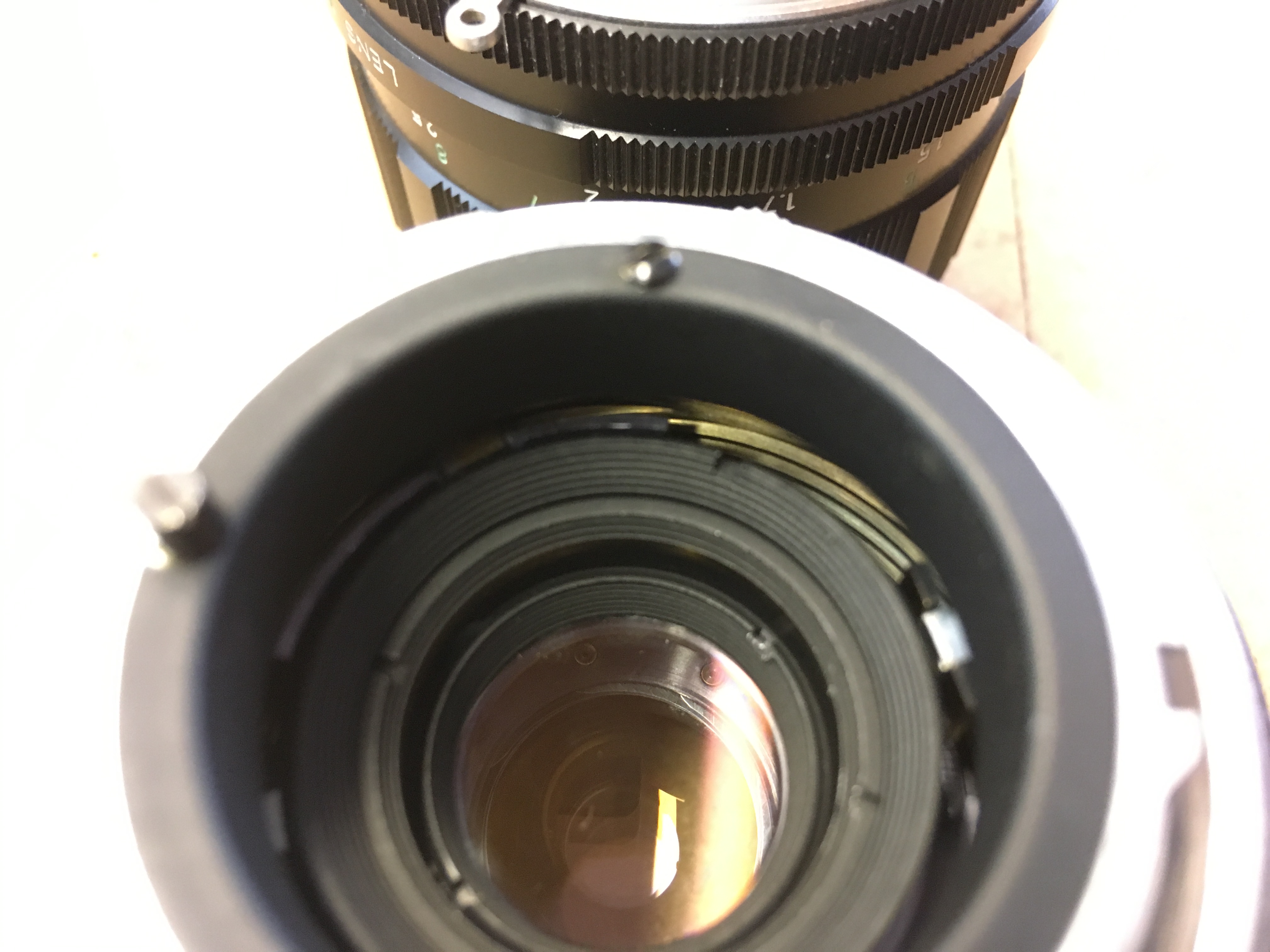 Here the nice even engravings are obvious (except for the ‘4’ on the ARI, missing on the later one altogether) as are the absence of engraved dots indicating half-stop clicks. Nice unblemished ‘Minolta green’ on the ft. engravings! 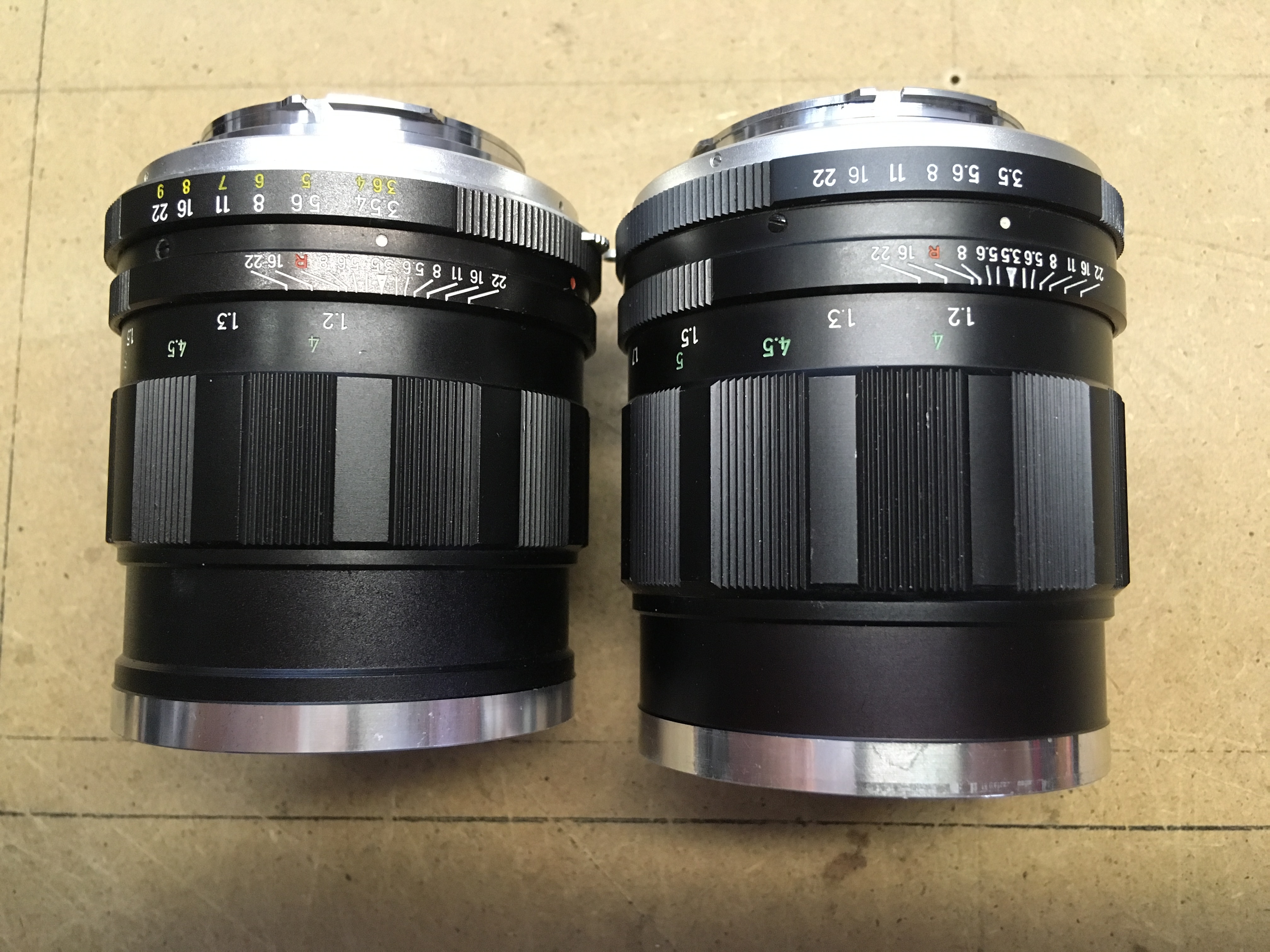 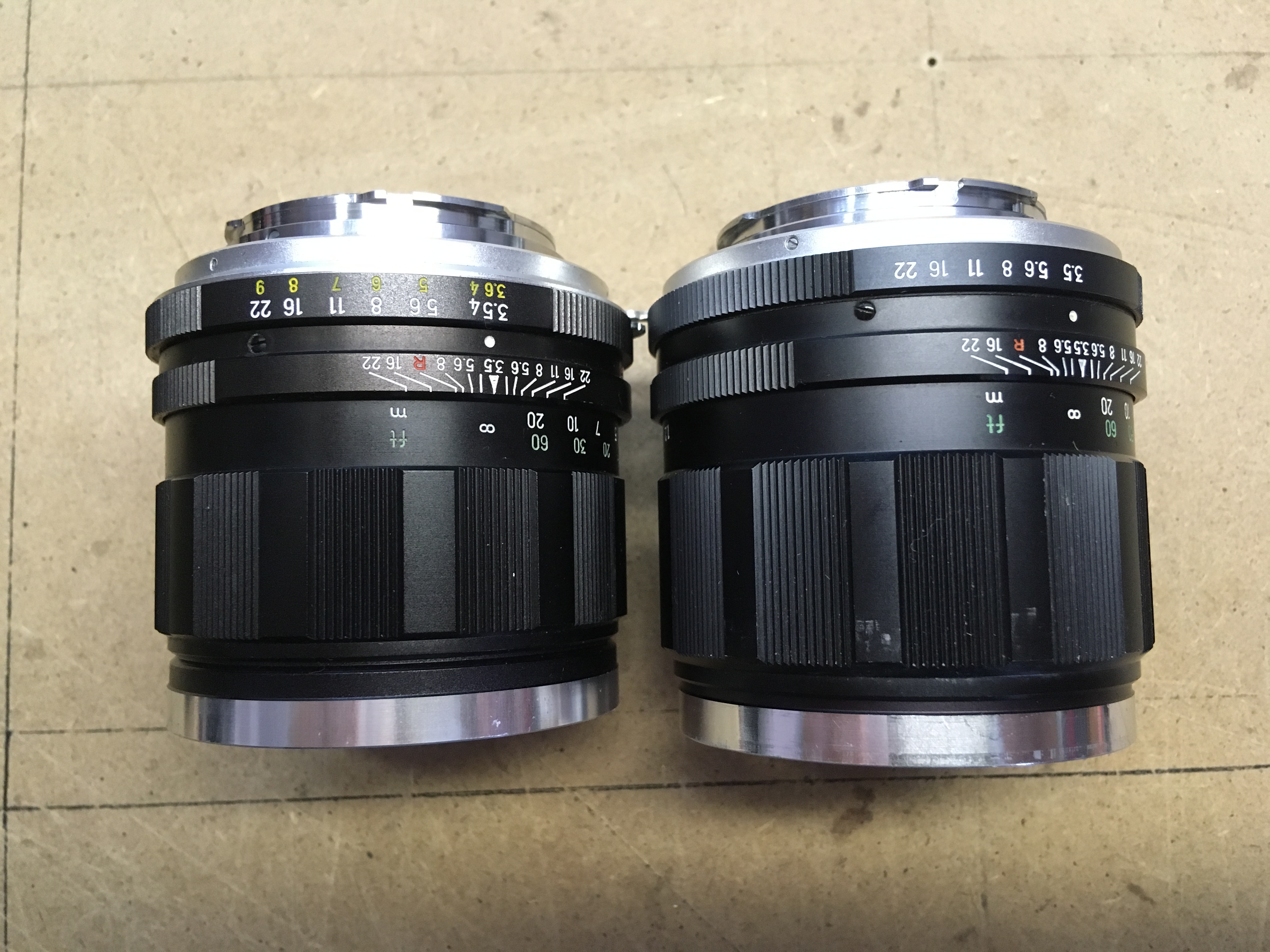 Now the other side and here the white ‘Lens made in Japan’ on the ARII  and the simple ‘Japan’ in black on the early lens. 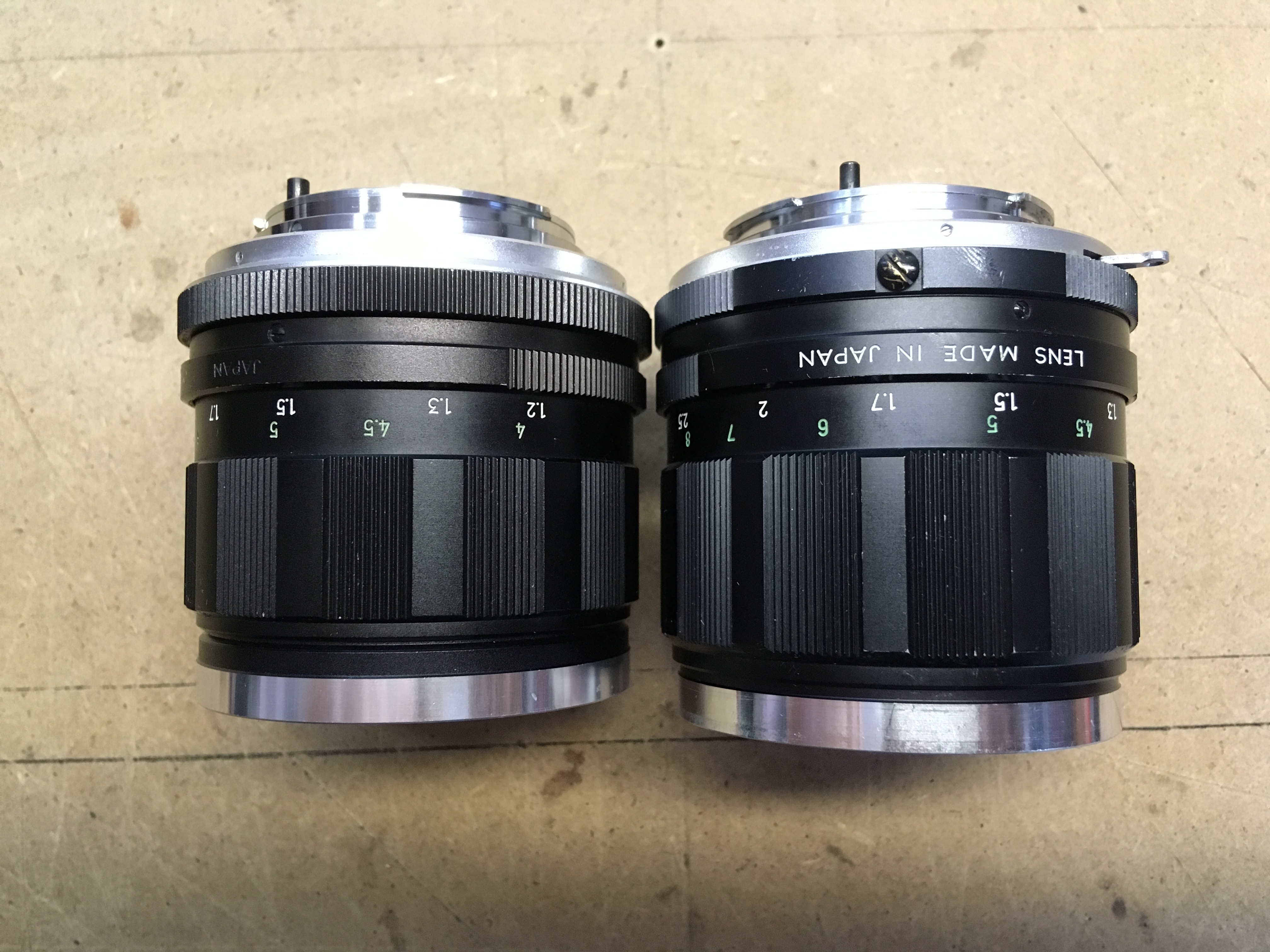 The big change for the ARII was not only the rear actuation of the aperture but in the iris itself, which had to be lighter and better balanced to react quickly to shut down and reopen adequately for the new shutter action on the now modernised cameras. Take a look down the barrel and the differences are obvious in the different shape of the iris itself. Still 8 blades, but very differently arranged, ‘back to front’, so to speak. 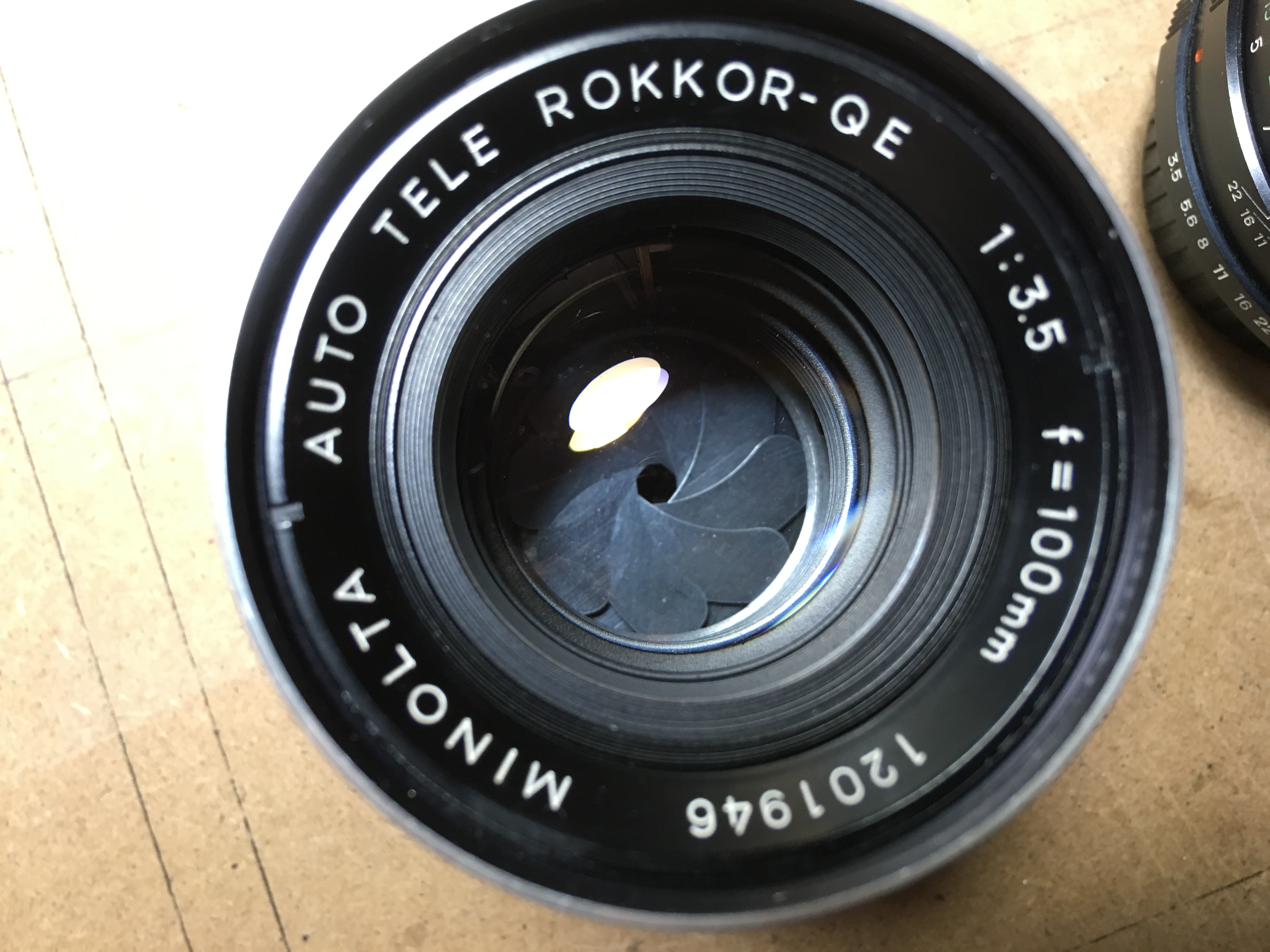 At f8 both look pretty much the same, though the earlier one is just a tad ’rounder’, but not enough to make any difference to the bokeh. 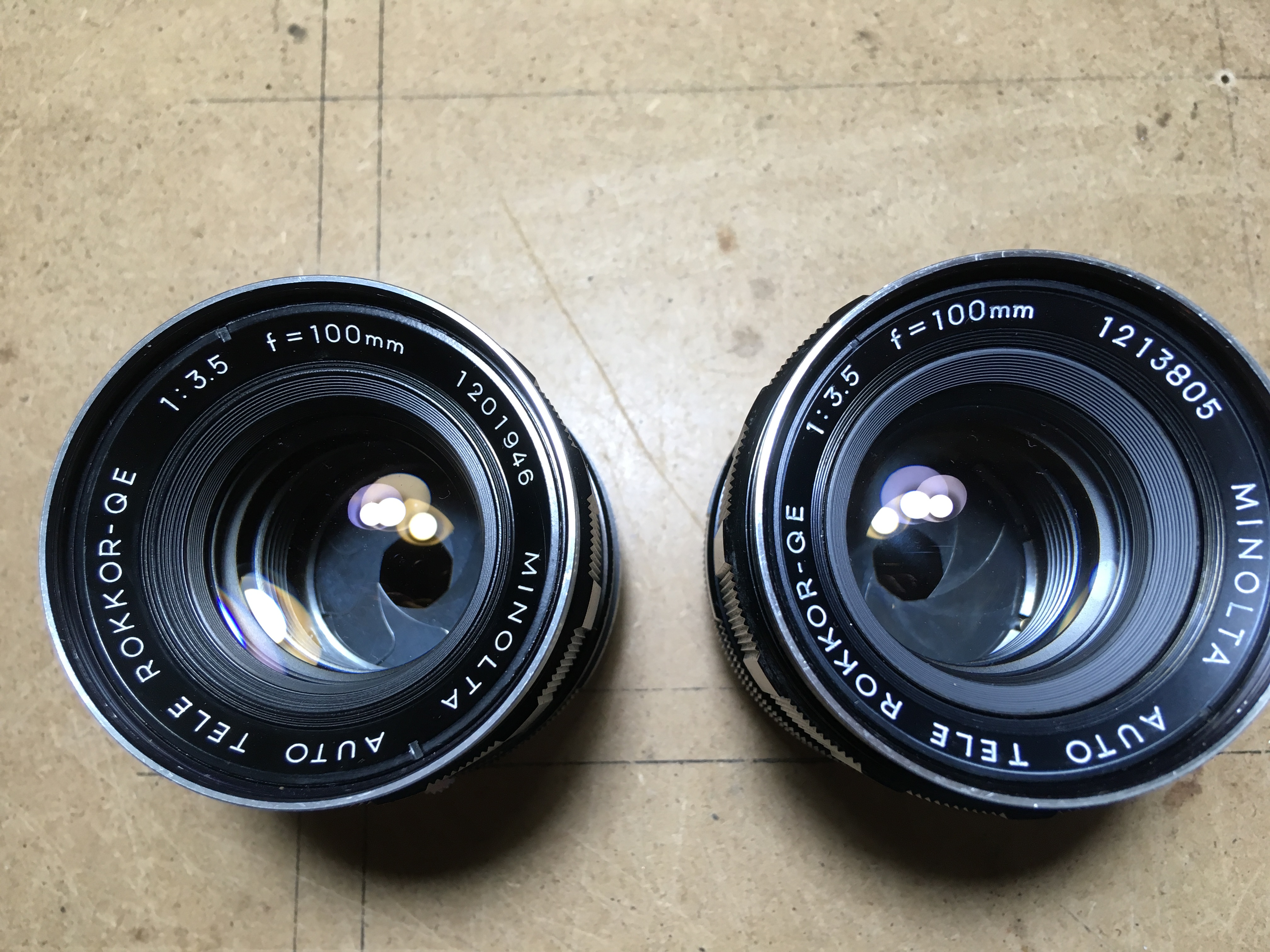 One surprise yet, is that the earlier, shorter by 3mm and narrower by 2mm in diameter lens, is heavier (402g against 382g) than the later one! Remember the difference in the thickness of the focussing-ring-casting?

The extra overall diameter of the later lens does have one potentially slightly annoying drawback… The DK57KD lenshood designed for it no longer fits on the lens backwards as it did on the early lens, so extra storage has to be found for it. Not really anything in the least important, but nonetheless worth mentioning. 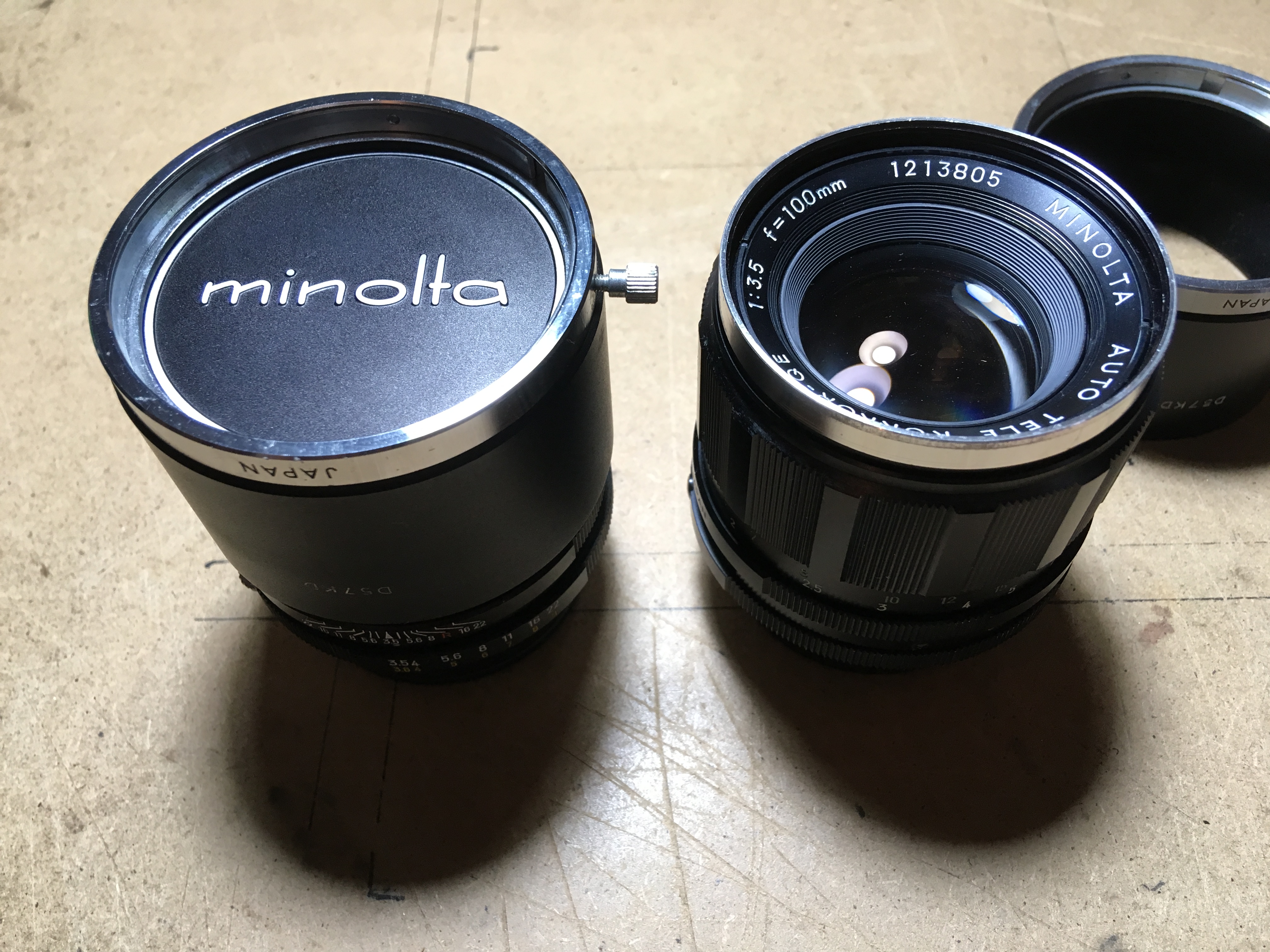 Next up? Not sure yet, as I go into hospital on Tuesday to operate on my right shoulder again 🙁 I also have to make sure that the car is back on its wheels by then…