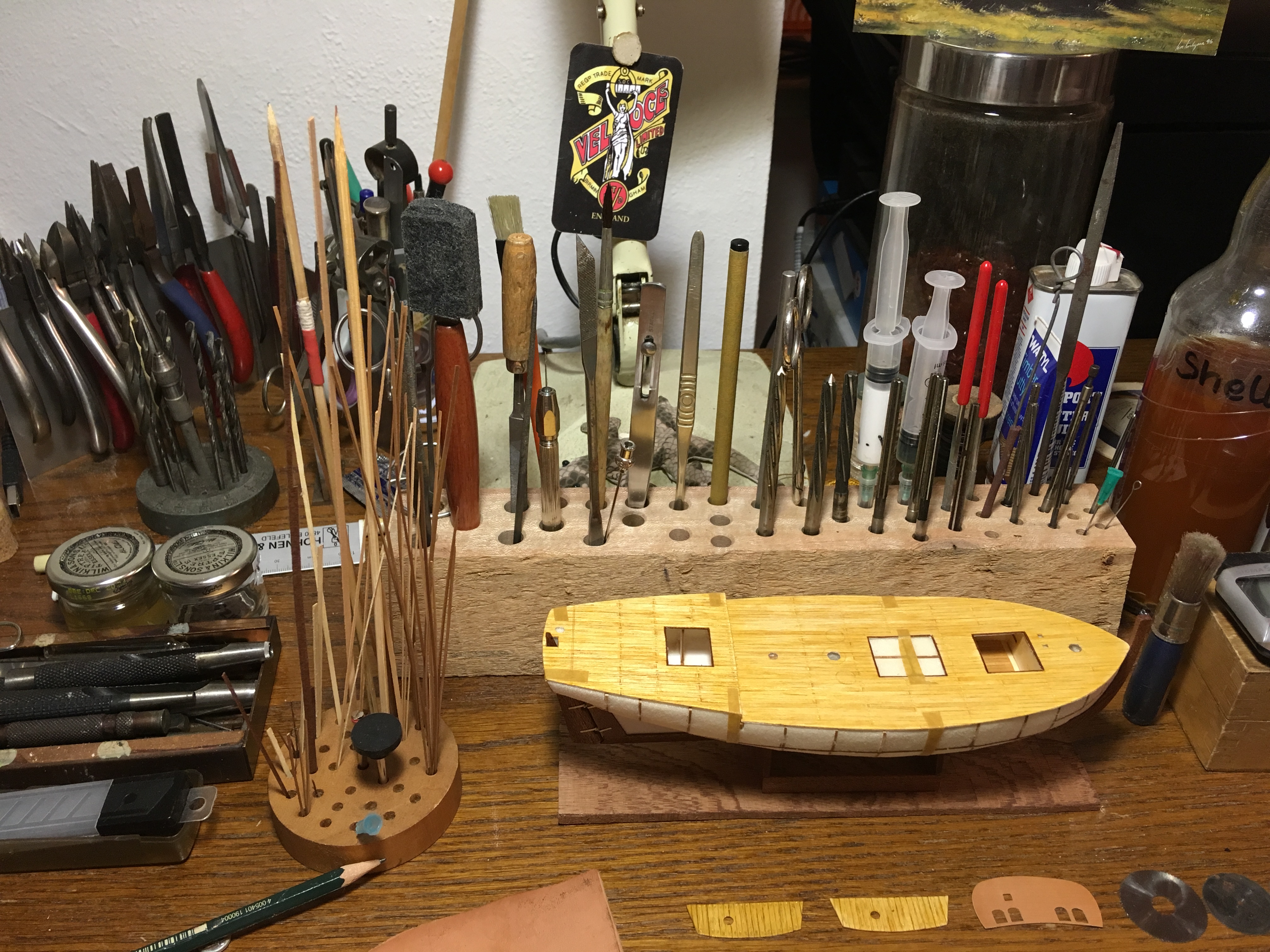 Work on progress on a Polish card model by ‘Shipyard’, of the French cutter “Le Coureur”.

I started making models when I was seven. My mum and dad came home from shopping around the corner to find that I had partly dismantled the radio under the B&O television that we had back then. It was still plugged in… So, they then decided, that it was time that I started MAKING things, instead of just dismantling to satisfy my curiosity about how things work. I was then presented with two ‘Frog’ models of airplanes (my dad was a pilot), a pea-green Sopwith Camel complete with pilot standing at the sharp end spinning the prop and a red metallic ME 109 (I seem to recall). Well, it was definitely metallic red!

And so my fascination with models began. First in plastic from ‘Revell’, Matchbox et al and mostly aircraft, then metal ‘Hubley’ Oldtimer cars followed by tanks, battleships, helicopters – even trains in all sorts of materials including Balsa, of course, especially for the aircraft.

I wasn’t flying radio control or anything like that, I was interested only in the construction of them.

As time has gone on, I took up making jewellery, which for me mostly involved cutting, filing, sawing, bending, forming and soldering silver (couldn’t afford gold then), then became a dental tech – much the same, but expanded my skills to modelling in wax and lost-wax-casting and using different metals and more materials (plaster, casting hard polymers and silicone for mounds and duplicating and applying and firing ceramics). After that I worked with Apple dealers as a technician and learned some more useful skills there, too, including CAD. A few years later still, I did an apprenticeship as a pattern-maker for the foundry industry… more models, new materials and much bigger scale models!

The latter also gave me to make parts for my vintage bike, car and aircraft projects 🙂

I discovered motorcycles at the age of 13 – older ones were the cheapest to obtain to play with – and so my love of vintage bikes was born, which flowered into a full-scale fascination of everything that went ‘suck-squeeze-bang-blow’ (4-stroke Engines etc). Bikes were followed by cars and those by aircraft… All older stuff, fully mechanical and as such relatively easy to diagnose and repair. Simple electrical, hydraulic and pneumatic systems with little electronic ‘interference’ makes for an easy overview of what is happening – or not – and why.

However, I digress: At the age of about 19 I discovered a shop called Seagull Models by South Kensington Tube Station. They sold PAPER models. I was entranced and immediately hooked. Seagull is long gone, but the fascination is still going strong and my collection is still growing, as is the amount of detail attainable with advances in Digital design of the card and paper offerings, enhanceable with wire, brass etchings and all manner of castings and extras.

I shall be adding blog entries as time goes on with work in progress in all materials and genres and pictures of some of the models I have made in the past.